CONAGO COMMISSION FOR THE DEVELOPMENT OF WINE INDUSTRY WAS INSTALLED 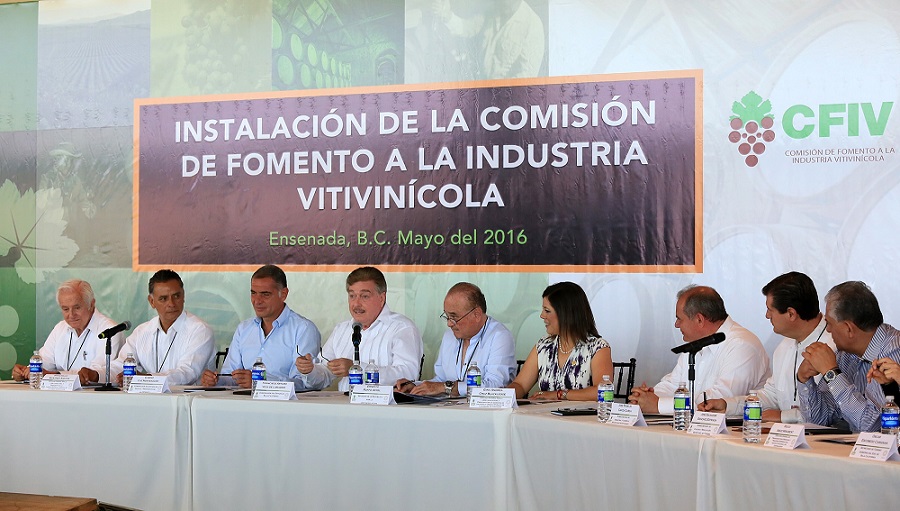 VALLE OF GUADALUPE , BC- Wednesday, May 11th, 2016.- The State Governor, Francisco Vega de Lamadrid and the Governor of Oaxaca and President of the National Conference of Governors (CONAGO), Gabino Cué Monteagudo, led the installation of the Commission for the Development of Wine Industry, through which this sector will be promoted in the country and which aims primarily to drive the industry by strengthening and promoting it, and finding availability of multiyear incentives and grants.

In this context, Governor of Baja California, Francisco Vega and the coordinator of this commission that was proposed by this border entity, stated that, from today, the efforts of the 10 producing states of wine will be coordinated, which are: Aguascalientes, Baja California Sur, Coahuila, Chihuahua, Guanajuato, Queretaro, San Luis Potosi, Puebla, Zacatecas and Baja California, in order to create conductive conditions  to the development of wine in fertile land.

He said that it is essential to work in coordination with Federal Government and thus obtain more resources for the production and development of the industry, it will be essential to promote the approval of Federal Laws for the Promotion of Wine Industry.

Another objective that stood out was the need of having more competitive agro clusters, integration of wine – a gastronomic chain combined with a tourism chain, as well as the need of laws and regulations for certification of mexican wine.

During the event held at the Wine Museum in Valle de Guadalupe, the heart of the Wine Route, the State Governor reiterated the commitment to producers for the development, promotion and boosting of the entire chain involving the gastronomy and wine industry, and thus generate regional development in those territories that have a clear productive vocation around wine and gastronomy.

For his part, the President of the CONAGO, Gabino Cué Monteagudo, said that mexican wine industry currently produces annually about 20 million bottles of wine a year, with an estimated value of 3 billion pesos, hence the relevance of the installation of the Commission for Wine Industry Promotion, as a privileged space for dialogue, consultation and coordination of efforts, which will create and propose a set of administrative and legislative measures to the federal government, aimed at consolidating this industry as a powerful lever for strengthening the national economy.

He reiterated the importance of promoting policies that lead to increased public and private funding, as well as mentoring and business training, essential to promote the development of regional clusters that help raise the competitiveness and efficiency of this thriving industry and stated being pleased about the formal installation of the CONAGO Executive Committee for the Promotion of Wine industry which, starting today, will be a platform to promote the development of this industry, with focus on sustainability and efficiency.

Prior to the formal installation of this committee several round tables were followed in which relevant issues for the sector were addressed, among there were: Production and Technological Development; Financing; Product, Promotion and Marketing, Fiscal Aspects, and Legislature.

The Secretary of Tourism of the State of Baja California, Oscar Escobedo Carigna; Secretary of Economic Development, Carlo Bonfante Olache; Link of State Government of Baja California to the CONAGO, Juan Antonio Martínez Zaragoza; Secretary for Economic Development and Competitiveness of the State Government of Coahuila, Jose Antonio Gutierrez Jardón; the General Director of Programs for Small and Medium Enterprises of the National Entrepreneur Institute, Rocío Abud Mirabent and the Technical Secretary of the CONAGO, Rolando García Martínez.