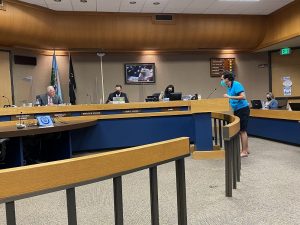 The Omicron variant has raised concerns and fears in a society that is still injured by the COVID-19 pandemic, that’s why two local politicians are asking the Imperial County Board of Supervisors to reinstate the mask mandate as soon as possible.

For several weeks, a group opposing government vaccine and mask mandates has gone to Imperial County meetings to ask the board to remove the Universal Mask Order that was implemented in August that required using face-covering indoors regardless of vaccination status.

It was now time for the group in favor of the masking requirements to let their voices be heard. This call to action was led by Calexico City Council members Gloria Romo and Raul Ureña who invited people to attend the meeting or submit letters asking the board to take action now that numbers are going up and the effects the new Omicron variant may cause.

Ureña and Romo appeared before the board to ask them to reinstate the mask’s mandate that they believe was rescinded due to “pressure of a minority of medium to a medium-high level that intimidates supervisors”. They were joined by a group of people that support the use of masks.

U.S. health officials said that while the omicron variant of the coronavirus is rapidly spreading throughout the country, early indications suggest it may be less dangerous than delta, which continues to drive a surge of hospitalizations. President Joe Biden’s chief medical adviser, Dr. Anthony Fauci, told CNN’s “State of the Union” that scientists need more information before concluding omicron’s severity.

Reports from South Africa, where it emerged and is becoming the dominant strain, suggest that hospitalization rates have not increased alarmingly. Fauci said the Biden administration is considering lifting travel restrictions against non-citizens entering the United States from several African countries.

However, the letter states Imperial County leads the state as the third-highest 7-day infections for COVID-19 according to information taken from the California Department of Public Health.

Ureña said during his comments on Dec. 7 that there is a lack of equity since the most vulnerable are not being protected.

“Ms. Angulo (Imperial County Public Health Director) says there are mask mandates for people that ride the bus. But that’s not the case those vulnerable people that feed this county and line the pockets of rich farmers that influence this county’s politics,” Urena said.

Councilwoman Gloria Romo spoke via Zoom in Spanish. She did it remotely since she was diagnosed with COVID-19. Romo said that the county should take strong actions against COVID and not be intimidated by a group of people.

“Los Angeles has strict policies such as showing proof of vaccination to enter a movie theater or a restaurant. How long are you going to wait? Until more people get sick or die?” Romo questioned the board.