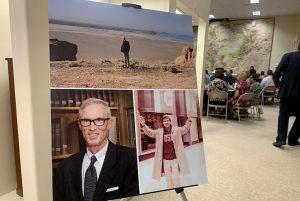 If there was an official title for someone that could be the Ambassador for Imperial County, that person would be Kevin Kelley.

Kelley was passionate about Imperial County, its history, and its most precious resource-water. His institutional knowledge will forever remain plastered in a book that was unveiled to the public in a special event on Sept. 24 at Pioneers Museum before a packed crowd of family and friends that knew and admired Kelley. It is a book for academia targeted at people that want to know about the history of Imperial County.

“Where WATER is King,” Kelley’s first book, is a story of creating California’s great Imperial Valley by bringing irrigation to the Valley. It provides a unique perspective on the people and events that helped make the desert bloom. The book will be on display and available for purchase at the Imperial County Pioneers Museum.

An advocate of the Imperial Valley throughout his professional career, Kelley served as general manager of the IID for eight years, guiding the district in protecting the Imperial Valley’s water rights, bringing attention to the Salton Sea, and continuously striving to make the Imperial County a better place for all. The attendees had the opportunity to hear from Kelley’s family who gave some emotional words about how he shared with them details of his work.

“He knew so much of the history of the Imperial Valley and he always had the intention of writing a book and he did not want to do it until he retired,” IID Director Norma Galindo said. Galindo played a pivotal part in the development of the book from the moment he started until he passed. “What he is saying is that good, bad, or indifferent, we have these rights that are given to us at a time no one ever taught Imperial Valley will amount to much. What does water mean? Water is the new gold and that is the reason why we face so much adversity with the IID right now because a small group of farmers, that were not present today, believe they are entitled to the use of the water and the rights of the water before anyone else.

IID General Manager Henry Martinez said this was a very good book for people to know more about water history.

“I think it tells a good story about the history of the Imperial Valley and those who formed this Valley. We also haven’t had the opportunity to gather as a community to celebrate his life and also celebrate his writing,” he said.

Before being named general manager, Kelley’s career included working for the El Centro Chamber of Commerce, co-founding Valley Grower magazine, serving as opinion page editor of the Imperial Valley Press, and leading the IID from 2011 until his retirement in 2019.