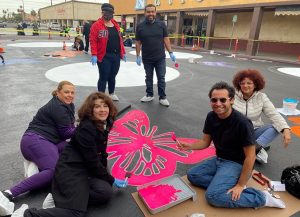 It was a cold morning in Calexico but that didn’t stop the community from gathering at Rockwood Avenue and helping paint a street mural that will help bring a positive change to the downtown area. This was a new beginning for the downtown area of ​​Calexico.

On Dec. 3rd, volunteers took paint and brushes to give color and a new identity to Calexico in what is the first part of an ambitious plan to renovate the area so it can be attractive to visitors and motivate people to shop locally.

Calexico was chosen among 200 cities from all over the United States to receive the $25,000 Bloomberg Asphalt Grant Initiative, the Calexico Arts Council searched for artists to help paint a project that will show the world what binational life is all about.

“Bloomberg chose us because they wanted to know what is like on the border. We can show New York the uniqueness of the relationship between Mexicali and Calexico,” said Carmen Durazo, President of the Calexico Arts Council in a previous interview.

The selected artist for the mural was Andrew Armstrong, a Brawley native but now living in Los Angeles, California.

“We wanted something colorful, vivid, and had the dynamic movement of cultural interchange between the two sister cities on the border,” Armstrong said.

The design incorporates graphical translations of the very popular genre of Folklorico Dance. Folklorico Dance is probably best known and characterized by its dramatic, colorful, and somewhat exaggerated dress movements. Flanking the core design is a representation of the celebratory and colorful practice of Papel Picado. This transparent overlapping scheme alludes to the craft’s ephemeral airiness and its place as a visual staple in the culture.

These dress and paper patterns come together in a dynamic, vibrant, and playful ground effect that alludes to the rich colors and forms of these rich traditions and hopefully, in some cases, even beg the viewer to partake in a twirl of their own.

“I’m very excited about these types of projects. The fact that the city of Calexico was chosen should make our citizens proud. There will be more events coming up so that people can come and shop here,” Councilwoman Gloria Romo said.

The grant program is designed not just to create vibrant new public spaces but also to build city capacity for working with artists and community groups on projects involving transportation infrastructure. Bloomberg Philanthropies’ Asphalt Art Initiative responds to the growing number of cities around the world embracing art as an effective and relatively low-cost strategy to activate their streets, with interventions on plazas and sidewalks, crosswalks and intersections, and other transportation infrastructure.

But the project has faced some opposition from some Downtown merchants that argue the closure of Rockwood Avenue would affect their sales.

“Communication is key and this project may be one of the first things that will bring life back to downtown,” Council member Camilo Garcia said. “This is not about only five council members, it’s about the community, and moving forward that’s what we are going to do with the merchants.”