The Governors of California, Baja California Norte, and Baja California Sur signed an agreement that would reactive the Commission of the Californias. Something that the office of Governor Gavin Newsom says it “creates a forum to share information around common issues and discuss the development of common solutions.”

“Today, as many seek to divide us, the interconnection between our states is more important than ever,” said Governor Newsom. “This MOU will create a forum to open doors for business and cultural exchanges within a region whose economies, histories, and conventions are inseparable. They will strengthen existing connections and grow new ones.”

Newsom signed an executive order establishing the International Affairs and Trade Development Interagency earlier this year and is chaired by Lt. Governor Eleni Kounalakis that will open a California trade desk in Mexico.

During some of the remarks on several media from San Diego, Baja California Governor Jaime Bonilla said that this will help solve cross water quality issues like in the Tijuana River Valley.

“Any problem that happens in San Diego has an effect in Tijuana and vice-versa. If we understand that, then we can work together on the issues,” Bonilla stated in an article written in the Voice of San Diego.

This concerns me since already the discussion of the cross-border issues from this commission in focusing in the San Diego-Tijuana area and is beginning to ignore Calexico-Mexicali. I’m not saying that the problems in San Diego are not important but since we have been historically being ignored in the Imperial Valley, this is a cause of concern.

If the Commission of the Californias is going be a productive and legitimate body that will create the change they need to look at the New River. 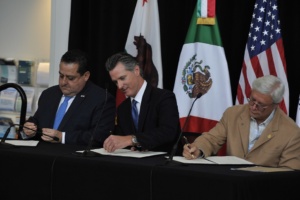 Since November 2016, there has been an average of one bypass of raw sewage per month from the failing sewer infrastructure in Mexicali.  The average bypass of raw sewage has ranged from 1 to 13 million gallons per day causing an increase of pathogens in the New River and an increase in nutrients into the Salton Sea.  Pumping plants, lift stations, and sewage collection systems are deteriorating with an estimated cost of $75-$80 million to repair the infrastructure problems.

In addition, current standards for Imperial County established in Minute 264 by the International Boundary and Water Commission (IBWC) are outdated and violate the Clean Water Act and California regulations.  However, standards in San Diego County and the rest of California are consistent with both federal and state standards.  The IBWC standard allows Imperial County to have 30-60 times higher levels of pollution in our river than any other community in the State of California.  That is full proof that Imperial Valley is not treated fairly and is a far afterthought for many state and federal representatives.

So in my book, the New River is more important that the Tijuana River Valley. Governor Bonilla is a former member of the Otay Water District so he knows the importance of having clean water and a sustainable environment. The cross-border tragedy of the New River has been going for more than 60 years and it’s time to solve it. Will the Commission of the Californias going to be another good intention, photo opportunity, waving the binational flag, or will truly create change?

The Imperial Valley has severe unemployment, air quality, water pollution, that needs to be addressed but also, Mexicali and Calexico are an important economic corridor that helps both economies. The Mexicali-Calexico area should not be the ugly duckling of California and Baja California and needs to be looked with new eyes.

Other binational efforts have failed due to the lack of follow-up and realistic goals. Will the Commission of the Californias going to be more of good intentions?