Colombian Movie to Debut in The United States 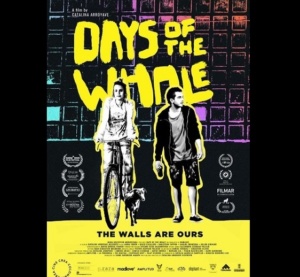 Set in the city of Medellín, Colombia’s second-largest city, Days of the Whale follows Cristina (Laura Tobón) and Simon (David Escallón), two young graffiti artists who tag spots around where they live. Simón comes from a more working-class background and lives with his grandmother. They are part of an art collective that is the center for a group of young revolutionaries.

Cristina is a college kid from an upper-middle-class family who finds herself living with her dad because her mother is a journalist who moved to Spain when threatened by the city’s criminal street gangs. The love that unites them and their friendship with other artists keep Cristina from leaving the city as tensions rise when Cristina and Simon’s rebellious, restless spirit leads them to defy this same gang by painting a mural over a threatening tag at the center.

Arroyave brings it all together to tell a story of how the powerful strength of youthful expression and new ideas are challenged by fear and violence. With her assured and fresh debut feature, joins a vital group of young Colombian and Latin American female filmmakers changing how the country and the region are represented in film. Days of the Whale offers a vital portrait of the urban culture of a city in flux.

Available beginning JULY 24 on Virtual Cinema through theaters in the U.S. and Canada, in partnership with Strand Releasing. *During this COVID-19 theater closures, Outsider Pictures continues to offer online virtual screening rooms created specifically for audiences, with a virtual ticket price of $12 on premiere theatrical releases, and a 50-50 box office split with theaters.

The Director, Catalina Arroyave Restrepo, was born in Medellín, Colombia in 1989. She majored in Social Communication and studied filmmaking in Argentina and Cuba. In 2010 she co-founded Rara, an-art house producing company based in Medellín. She has worked as an assistant director and teacher for several years. Her debut film, Days of the Whale, won two screenplay awards, the most important Colombian production fund (FDC), and will premiere in SXSW.