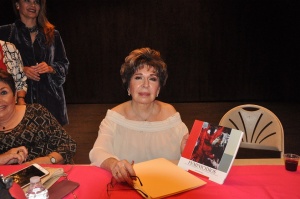 Colilá Eguia, is a highly respected journalist in Mexicali, who already has nearly 40 years of practice in the profession, forming her experience in radio, print and television. The current president of the FAPERMEX (National Federation of Associations of Journalists in Mexico) already has several recognitions due to her work, such as: the Glolden Microphone, two Mexico Awards for Journalism, in 2017 the Mexico Flores Magón Award for Journalism, and from the Association of Women Journalists and Writers, the Rosario Castellanos Award, among others.

Colilá has also been a constant activist, always working towards the professionalization of freelance journalists through the FAPERMEX, since in 2004 and 2005, through the Autonomous University of Chihuahua, the titling of an important number of journalists in Mexico was achieved, and recently she continues to work on the same task, having recently started a master’s program in journalism with some of her colleagues who already had a bachelor’s degree, a program she’s about to complete.

Colila is not only an outstanding journalist and communicator, but also a reknown writer who already has 7 published works, among which are: Politics is Also a Matter of Women, The Forgotten, At Point-Blank Range, Power Delivery, Chronicles and Reflections of Our Visit to China, Notes of a Reporter, and her most recent and very successful work: “Feminicides”, which has already been presented with great success in Mexicali, Tijuana, Ensenada and soon in Tecate, Baja California.

The inspiration and creation of her most recent work, Feminicides, came about because of her master’s thesis in criminology, having chosen the title since 2010 when she began to take her master’s degree while living a very violent time against women, as in the case of the deaths of Juarez, and discovering, after a study, that this was not the number one or the most violent state against women in Mexico, she decided to make of her thesis a book, for which she says: “The greatest Revolution that we have ever lived is that of women, seeking gender equality, seeking freedom from the patriarchy in which we have lived for centuries and centuries … Not all murders of women are feminicides, a feminicide is when a woman is killed because the mere fact of being a woman. Feminicide is still very common in our Mexico, and not only against adult women, but against teenagers and girls and I think it is a struggle that we all have to undertake”.

Watch our full interview on our social networks or YouTube channel.