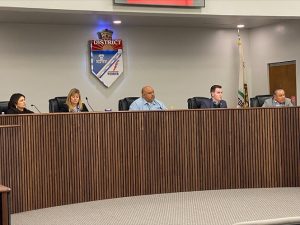 The Imperial Irrigation District Board of Directors reviewed the Coachella Valley Water District Oasis environmental project at their Dec. 6 meeting.

The Oasis Area Irrigation System Expansion Project, located near the northwest margin of the Salton Sea, south of 66th Avenue, west of Harrison Street, and north of 86th Avenue in Riverside County, California, was developed by the Coachella Valley Water District (CVWD), proposes to supply up to 32,000 acre-feet of Colorado River water per year for irrigation to replace the current groundwater pumping.

Additionally, it will allow recovery of the underlying aquifer through system improvements that include the construction of 18 miles of underground pipelines (to be connected to the U.S. Bureau of Reclamation’s existing water delivery), three reservoirs, four pump stations, and the installation of water meters within concrete vaults.

The implementation of the project requires the update of an existing Imperial Irrigation District electrical circuit to provide power to the pump stations as described in the CEQA System Expansion Project/IID Electrical Upgrades, dated November 14, 2022, attached herewith, is an integral part of the project.

The project’s environmental effects were assessed in a Final Environmental Impact report dated February 2015, prepared by the CVWD as the lead agency and under the California Environmental Quality Act. It was adopted and certified by the CVWD Board of Directors, including a Mitigation Monitoring and Reporting Program, on March 10, 2015.

The upgrade locations for IID’s new electrical expansion to provide the required power for the project were still being determined when the Final EIR was completed. Consequently, the CVWD prepared an addendum to evaluate the final circuit routing and construction requirements and determine whether the potential impacts and required mitigation measures identified in the Final EIR adequately cover the possible effects of the final electrical circuit design. Based upon the addendum’s analysis, the proposed electrical circuit expansion routing and construction were determined to be consistent with the description of the environmental setting, environmental impacts, and mitigation measures outlined in the originally certified Final EIR.

Considering the IID’s policy for calls for IID facilities system upgrades or modifications required for the project to be included in the environmental analysis and any resulting impacts be mitigated by the project developer.

The United States Department of the Interior, Bureau of Reclamation released a mid-September Funding Opportunity Announcement for Small Surface Water and Groundwater Storage projects. This funding opportunity could assist the Water Department in cost-share in the construction of IID’s upstream operational storage reservoir. Under consideration is an operational reservoir that would have a 2,100 acre-feet storage capacity and that once constructed would manage up to 365,000 acre-feet of water per year. Water management efficiency and operational flexibility would be maximized under the project to benefit water customers within IID’s water service area with an augmented water supply yield of at least 15,000 acre-feet annually.

The total project costs are currently estimated at $74.1 million. The grant requires a minimum 75 percent cost share from IID, estimated at $55.6 million, with a potential federal cost share of up to 25 percent, estimated at $18.5 million. Construction is anticipated to begin in 2024, conditioned upon board approval of major work authorization for the project to be included in the 2024 and 2025 water department budgets.