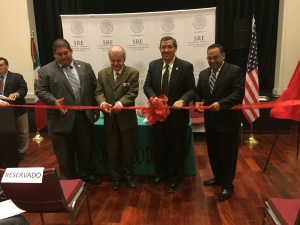 The City of El Centro and the Mexican Consulate in Calexico signed a Memorandum of Understanding on Friday, November 18th, 2016 designating the Old Post Office Pavilion as the Cultural Center.

The City of El Centro took another step in that relationship as they opened a “Cultural Center” which was named Imperial Valley “Casa de la Cultura” that will be located at the historic Old Post Office Pavillon.

Located on the corner of South Fifth Street and Olive Avenue, the historic El Centro Post Office Pavillon stands today as a window into the Valley’s earliest days. Constructed in 1932, the Old Post Office served as the city’s main post office until 1970s when it was converted into a cultural center and art museum through the efforts of the City of El Centro and Imperial Arts Council.  The Old Post Office Pavilion is El Centro’s most historically significant building and is one of two buildings in Imperial County listed on the National Register.

The Old Post Office Cultural Center has as main objective to increase the population’s opportunities to have access to different artistic activities, and to help in the development and diffusion of expositions, conferences, literary gatherings, music, theater, and film.