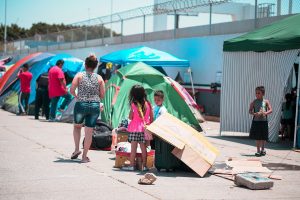 Due to the sudden increase of migrants coming through this border area, the Calexico City Council held a special meeting on Dec. 29 to pass a resolution proclaiming the existence of a local emergency.

In what is to be one of the most challenging issues for 2023, the council took action to prepare and take action on the upcoming increase of migrants arriving in this area and ways they can address it.

“Declaring a state of emergency will give the city manager the capacity of spending x amount of dollars in the emergency. There will be actions taken that will be announced publicly in preparation for the big wave when Title 42 is lifted,” Mayor Pro Tem Raul Ureña told Beyond Borders Gazette.

Recently, the U.S. Supreme Court decided to keep in place a Trump-era immigration restriction known as Title 42. The policy was instituted during the start of the COVID pandemic and allowed border agents to immediately turn away asylum seekers at the border. The policy had already been ruled unlawful by a federal judge but was reversed by the nation’s highest court.

During the weekend of December 23, 2022, the United States Department of Homeland Security (DHS) began releasing a substantial number of immigrants seeking asylum into the City through the Calexico West Port of Entry.

The releases are the result of the local shelter, which currently lodges individuals and families seeking asylum, reaching its capacity earlier that day.

Following reports of a large group of immigrants gathering at

Friendship Park and local shelters at maximum capacity, the City, in conjunction with the Imperial County Department of Social Services, began assisting the group by providing temporary housing and arranging transportation to their final destinations.

“Without this assistance, many of them, including women and children, would have slept on City sidewalks without shelter,” Calexico City Manager Esperanza Colio stated.

Due to rapidly changing immigration policies at the federal level, the City anticipates that many more groups of immigrants will be released into the City by DHS.

County staff identified that approximately 30 individuals were released, including women and children. These migrants came from different countries such as Ukraine, Afghanistan, and some from Central America.

“This rapid influx would exhaust City resources and be detrimental to the health and safety of those seeking asylum in the U.S. The city of

Calexico is requesting consideration to receive additional resources and funding at both the State and County levels to assist this large influx of immigrants by providing temporary shelter and arranging transportation to their final destinations,” Colio added.

The City Manager, City Fire Chief, and City Attorney have determined that a

Daniela Flores representing the Imperial Valley Equity and Justice Coalition said that when Title 42 is lifted there will be a huge increase of asylum seekers that will arrive in Calexico and Imperial County.

“This is a broad issue we need to look at our partners in San Diego and their rapid response network. We need to be part of that network so we can have that regional borderland, rapid response team,” Flores said.

The City’s emergency operations staff remains in close contact with the Imperial County Department of Social Services and the United States Department of Homeland Security. The City will continue to assess the situation and work alongside our partner agencies.

Imperial County Supervisor District 1 Jesus Eduardo Escobar said the County is going above and beyond to address this issue despite its monetary and personnel limitations.

“This problem is not going to get better; it is going to get significantly worse and we need to be humane in how we treat these individuals. Whether they come here legally or illegally we need to be careful how we treat them,” Escobar said. However, Escobar said that the city and the county should force the hand of state and federal representatives so they can have open communication and have a structure on how to address the migrant issue.

“Sending a letter is the easy part what we need is a solution from the state for this problem. We need action, not politics,” Escobar said.