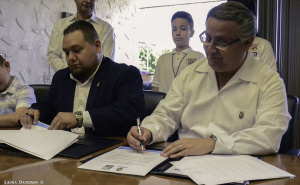 In an effort to reaffirm the close ties between the two cities, the City of Calexico and the Municipality of Mexicali signed a sister cities agreement to reaffirm their binational relationship and work on issues that affect their communities.

Calexico and Mexicali are two cities that were born at the same time and have shared family, cultural, and commercial ties. The life in a cross-border community is unique and the relationship between the two cities has always been a close one.

On Friday, April 28, 2017 Calexico Mayor Armando Real and Mexicali Mayor Gustavo Sanchez Marquez signed an agreement to reaffirm their relationship and work on common issues. Both cities vowed to work in economic development, public safety, environment, culture and other issues.

Mexicali Mayor Gustavo Sanchez indicated that more than 100 years of history unite both cities and now more than ever there needs to be a stronger working and friendship bond between them.

Calexico Mayor Armando Real thanked Mayor Sanchez for being open to this relationship and make bridges of communication and friendship between the two cities. Real mentioned that both Calexico and Mexicali need each other and can accomplish a lot together.

The sister cities concept was made official  when Calexico Mayor Fernando “Nene” Torres and Mayor Palomera of Mexicali signed the joint resolution that declared Calexico and Mexicali as sister cities. This was done in the 1980’s and that’s where the neighboring cities because formalized their relationship.

A decade later, Calexico Mayor John Renison and Mexicali’s Eugenio Elourdy met several times and worked with security in border issues that emphasize in the collaboration of the fire department and police in case of a big emergency. Mayor Jaime Diaz followed and met with members of the Calexico City Council several occasions and both signed a mutual aide agreement in which Calexico Police Department will give two Kawasaki 1,000cc motorcycles and 21 bulletproof vests to the Mexicali Police Department and coordinate crime fighting efforts with Calexico police. The Mayor that signed the agreement with Mexicali at the time was Victor Carrillo.

The following Mayor was Samuel Ramos Flores who showed a big commitment not only to Calexico but with the County of Imperial. Mexicali Mayor Samuel Ramos came to Calexico in 2005 with all his cabinet and department heads to initiate and met with their Calexico Counterparts to draft a plan that would include public safety, urban development, and regional economic development. The meeting was held the Calexico Women’s Improvement Club.

One of the great things about the administration of Samuel Ramos was his willingness to have joint City Council meetings in Calexico. Mayor Alex Perrone at the time participated on those joint Council meetings and had a strong relationship.