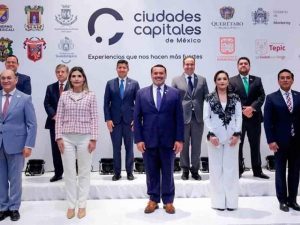 At a press conference, the mayors who make up the Association of Capital Cities of Mexico (ACCM) announced the signing of the charter of this organization.

The Mayor of Mexicali Norma Bustamante, who is part of this association as Vice President, explained that the objective of this organization is to work in coordination with the other mayors to analyze policies, as well as public security strategies such as crime prevention and patrimony of the residents.

In addition, she added that as part of the first actions of the ACCM is to propose best practices for the issue of budgets, to govern for the benefit of citizens.