Citizens in Baja California turned out to vote 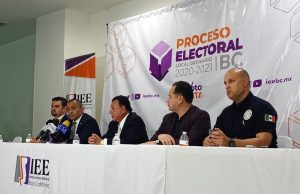 MEXICALI, B. C. – State elections were held in in in which unprecedented events in the history of Mexicali and Tijuana took place. Criminal incidents were recorded from the early morning before the elections began and during the day.

It was around 5:00 a.m. that a man reported gunshots being fired in an administrative building of the MORENA Party in the Benito Juárez neighborhood in the state capital, where 23 shell casings were found. A human head that was thrown into a voting place in the Terrazas del Valle neighborhood in Tijuana, as well as human remains near the location of another polling place and a burned box, was registered as part of the unprecedented criminal acts.

While, in the state capital, 97 incidents were counted, among them the hauling of voters, a voting place not installed, 14 reports of theft of ballot boxes by armed individuals, which ceased their activities for a time in some, however, they were able to resume except in four of them in which they permanently suspended their functions. This resulted in around 49 people arrested, including 13 minors.

Candidate Hank Rhon expressed that these events were regrettable, that they are part of the impunity that has been seen in the 90 days of the campaign where there have been two murders per day.

The President Counselor of the IEE (State Electoral Institute) of Baja California, Luis Alberto Hernández Morales, expressed: “Despite these incidents that happened today on election day, I think the message sent by the  Baja California society, the large lines that we all could see when entering the polls is a rejection of this violence and that the population was not intimidated.”

On the other hand, within an hour of closing the polls, Morena’s candidate, Marina Del Pilar Ávila Olmeda, announced her victory according to an exit poll in which she was winning decisively.

According to the quick count estimated by the IEE BC, Ávila Olmeda leads the votes for the governor of the state with 48.3% in his favor, followed by Jorge Hank Rhon with 30.5%, and in third place is Guadalupe Jones Garay with 13.1%.

“For those who did not vote for our project, I will govern for you and everyone and I will listen to those who will contribute to the development of the state,” said Ávila Olmeda. The candidate invited her followers to celebrate at the Lázaro Cárdenas monument. On his part, PES Candidate Jorge Hank Rhon said that he would respect the results and wait for the official numbers. “Baja Californians have spoken today with their vote,” he said.