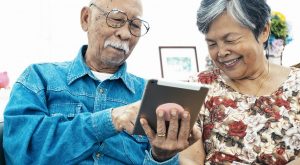 One of the most prominent and likely enduring changes brought about by the COVID-19 pandemic has been the rapid shift towards new technologies that facilitate remote communication, entertainment, learning, and work. While older Americans generally have lower rates of technology adoption than their younger counterparts—for example, 78% of 65-and-over households have internet access compared to 89% of households overall—they are more digitally connected today than ever before.

Technology has enabled seniors to endure some of the most trying aspects of the COVID-19 pandemic, by allowing them to stay in touch with others during isolation and providing them with access to critical services such as grocery delivery and telehealth visits. A recent AARP report found that technology spending among older adults nearly tripled during the pandemic, and smartphones were one of the top three tech purchases for that demographic.

AARP also reported that significantly more seniors texted, used video chat, and emailed during the pandemic than they did before.

While 78% of seniors have some form of internet access, just less than 60% have high-speed internet subscriptions, and 67% each have a computer and smartphone, according to the most recent Census Bureau statistics. These numbers vary widely by location and socioeconomic status. For example, research points to a strong rural-metropolitan digital divide among older Americans. Likewise, extensive research points to low rates of technology adoption in less-educated and low-income senior households.

Similar trends hold at the local level, with many metropolitan areas in California, Colorado, Utah, and Florida topping the list. In general, more affluent cities with strong economies report the highest rates of technology use among the 65-and-over population.