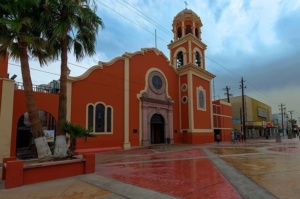 MEXICALI, B.C.- The reactivation of churches and swimming pools that comply with sanitary protocols to prevent contagion, was authorized by the state Administration headed by Governor Jaime Bonilla Valdez, announced this Sunday Mario Escobedo Carignan, Secretary of Sustainable Economy and Tourism (SEST).

“The centers of religious worship may receive parishioners, at 30% of their capacity, with mouth covers, healthy distance and all the necessary measures to prevent contagion, according to the protocols agreed with the Secretary of Health,” he said.

Secretary Escobedo Carignan pointed out that there has also been a positive and understanding attitude from religious leaders, who have pledged to respect the provisions, since nobody wants a new outbreak of contagion in their community.

Likewise, he announced that the pools are being reactivated, at 25% of their capacity, especially in hotels, with specific indications in surveillance and the application of preventive criteria.

“All pools must have lifeguards, who will now have the function of taking care of order and healthy distance are maintained, with special attention and care on children,” said Escobedo Carignan.

According to the daily analysis regarding the contagion situation, the state official explained that all physical activity involves greater exhalations, which increases the possibility of contagion, which occurs in gyms and sports centers.

“We are reactivating, but that doesn’t mean that we’re going to return to what we did before, in that sense, we must carry out activities within the criteria of new normality,” stressed the state official.