Inflation will raise the cost of Christmas dinners in Mexico and the United States by at least 10% and expenses on average 27% more than in other years.

Christmas dinner this 2021 will have an increase in prices in 2021 in its cost compared to last year since inflation in Mexico and the United States is at much higher levels than in other years.

Families in Mexico and the United States have to take into consideration that there are price increases in various products included in Christmas dinner, in drinks, beers, wines and soft drinks that have become more expensive, as well as desserts, since several inputs for Baking cakes have risen in price.

“We are seeing very high levels of inflation in Mexico and the United States. Christmas dinner will be more expensive in December 2021 for families in California and Baja California”, stated in an interview with Dr. Alejandro Díaz Bautista, International Economist and Research Professor at Colef.

Inegi reported that, in November, the National Consumer Price Index showed a growth of 1.14% compared to the immediate previous month. Therefore, inflation was at an annual rate of 7.37% during the third quarter of the year, a figure that represents the highest in 21 years for Mexico.

This increase in prices can be observed in the inputs necessary to prepare the traditional Christmas dinner in Mexico, since meat, chili peppers, fish and other foods have had an increase compared to last year.

The Federal Reserve of the United States announced that in December it will define the withdrawal of the multimillion-dollar bond purchase program in search of containing the highest inflation in three decades in the United States. 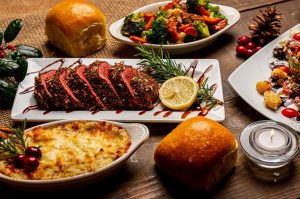 The highest inflation in three decades in the United States would be more “persistent” than the monetary authorities of that country expected. This was confirmed by Jerome Powell, president of the Federal Reserve (Fed). In fact, Powell said it is the “right time” to stop using the word “transitory.”

October annual inflation in the United States was 6.2%, the highest in 30 years. The end of the year is getting closer and closer and the happy colors began to illuminate the homes of families in North America, who after receiving the bonus or Christmas bonus and some other extra money, have begun to plan the delicious banquets that they will enjoy at their tables whether at Christmas or New Year’s dinner.

This holiday season of December and New Year is full of flavor, peace, love, cravings, and posadas, which for many represents an opportunity to set new resolutions, and could also represent expenses that, if not taken into account, would seriously affect the pocket of families Hence the importance of budgeting and saving the Christmas dinner or the end of the year 2021.