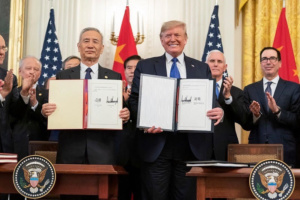 In a major economic victory for President Donald Trump, China and the United States signed a new trade deal easing tensions between the two countries.

Both countries signed the first phase of the new trade deal after two years of negotiations.

“From day one, my Administration has fought tirelessly to achieve a level playing field for the American worker,” President Trump said.

This historic agreement will begin to rebalance a vital trade partnership with China and benefit both countries. The administration believes this agreement will be an incredible boost for American businesses, farmers, manufacturers, and innovators.

For the first time in any trade agreement, China agreed to end its practice of forcing foreign companies to transfer their technology to Chinese companies in order to gain market access.

As a part of the new agreement, China has pledged to increase imports of American goods and services by at least $200 billion. China’s increase in United States imports will take place over the next 2 years, and the trajectory is expected to continue even after 2021. This increase will make important progress in rebalancing the United States-China trade relationship.

China will be making purchases of United States manufactured goods, agriculture, energy, and services under this deal. China has agreed to purchase between $40 and $50 billion in American agricultural goods each year for two years – providing a massive boost to America’s hardworking farmers.