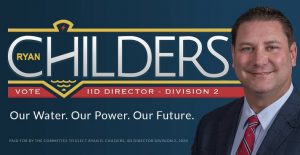 Ryan Childers is running for a seat with the Imperial Irrigation District Board of Directors.

Childers is running against candidate JB Hamby in November. During the March primary, IID Director Bruce Kuhn was defeated and did not make it to the runoff. Kuhn has since endorsed Childers’ candidacy.

Childers believes that his education as an accountant and attorney and the experience he has gained serving his community as a lawyer, businessman, coach, volunteer, and 12-year school board member makes him uniquely qualified to serve the community on the IID Board of Directors.

“I will bring a fresh perspective and energetic leadership to the IID and work to make it more efficient, effective, and better able to serve our community,” Childers stated.

Childers was asked about the recent blackouts that happened during the weekend on the hottest day of the year. Childers said the IID has managed to avoid being forced to become part of the California Independent System Operator (“CAISO”) which controls the supply, distribution, and on occasion blackouts throughout most of California. IID is largely exempt from CAISO authority, despite tremendous pressure from the state. If IID were a part of CAISO the blackouts could have began as far back as August 16th, he said.

“While any blackouts are unacceptable and the IID must begin an immediate investigation to determine the exact cause of these power outages and then take aggressive steps to ensure they do not happen again. It is equally important that we elect an IID Director who will fight, at all costs, to avoid the IID being forced in CAISO which would mean more power outages beyond our local control. This must not happen,” Childers said.

For Childers, mitigating environmental issues concerning the Salton Sea is vital to the health and wellbeing of everyone in the region.

“We have one of the highest asthma rates in the state and that needs to be addressed. That will be the main issue when we meet with state and federal legislators,” Childers said. “We must make noise and let them know that even if we are at this corner of the state and being one of the poorest counties, they should not turn the other way and not take care of us like the rest of California. We deserve clean air just like anybody else,” Childers said.

The IID has been affected by COVID-19 due to delayed payment by customers and other expenses to protect their staff. These issues will create financial problems for the district that could lead to rate increases. Childers said he will oppose any rate increase.

“We have seen the cash balances of the IID increase by $12 million dollars and while there are projected budget deficits, the cash balances are going up. There are also other pots of money that are available on the IID’s balance sheets which have essentially been untouched and that is comprised of the energy cost adjustment account and the rate stabilization account and combined that is $83 million that is sitting there on the budget. So before we began talking about rate increases, we need to look at spending those monies and avoid raising rates at all costs.”