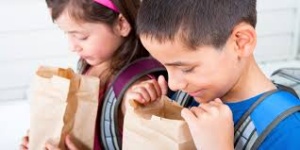 Child hunger is a major problem in the Imperial Valley since 1 in 2 children live with food insecurity. For the most vulnerable, school breakfast and lunches may be the only food that child receives and weekend, away from school, can mean two days of hunger.

In a valley that is known for being a very productive region, ranks number one in California for child hunger.

An initiative started by County Supervisor Jack Terrazas brought awareness to an ongoing issue that affects hundreds of children in Imperial Valley and mobilized several other services organizations to support the cause.

In February 2016, Chairman Jack Terrazas announced during the annual State of the County Address that his mission during his chairmanship of the Board of Supervisors will be to fight hunger, specifically childhood hunger, in Imperial County, currently referred as the “2016 Fighting Hunger Campaign.”

The Imperial County Board of Supervisors made a big donation to the Imperial Valley Food Back to assist children that suffer hunger each day.

In the weeks following Terrazas’ address, the IVFB received $4,500 of pledge donations toward the Backpack Program that have been attributed to the Chairman’s call to action. Additionally, the County secured a $5,000 donation from AT&T California for the program. Furthermore, the board allocated to collectively allocate $9,000 of Community Benefit Program funds to the Backpack Program. Therefore $18,500 is the total of all donations listed above.

The Imperial Valley Food Bank’s Weekend Backpack Program partners with local school districts in Imperial County to meet the needs of local children by providing them with meals to prepare on the weekends when resources are not available.