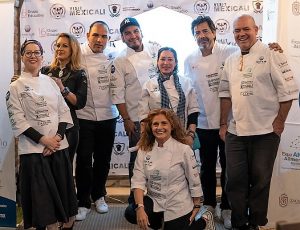 Chef of the Year Mexico has held a semifinal for the second time in the city of Mexicali, during the 7th edition and with the collaboration of COTUCO Mexicali, Universidad Vizcaya de las Américas and Grupo Educativo 16 de Septiembre.

This is the 6th semifinal of the seventh edition of the Mexico Chef of the Year Contest, held at the Vizcaya de las Américas University in the city of Mexicali; It was a regional semifinal that included the states of Baja California and Baja California, Sur.

Thanks to the alliance established with L.A. Cetto, the participants had at their disposal 10 different wines and they were introduced to them in a tasting that they had with the Sommelier Pilar Meré so that they could decide the wine with which they would later pair each of their dishes.

In this semifinal the 10 semifinalists have been:

The jury has been integrated by:

And as floor jury were the chefs:

Likewise, there was a program of master classes and lectures given by the renowned juries who accompanied us and which had no cost to the public;  thus counting on the assistance of more than 300 people for each of the master classes.

After two arduous days of competition, in which the jury rated flavor, texture, creativity, proper choice of wines for pairing, hygiene, procedures, etc;  The winner of this semifinal and will represent the region in the Grand National Final that will take place in 2023, is Raúl Oswaldo Soto Domínguez – Hotel Esperanza – Cabo San Lucas, BC.

With a menu consisting of:

The purpose that drives Chef of the Year Mexico is to promote Mexican gastronomy and support gastronomic tourism and small producers at such an important moment for traditional Mexican cuisine, which in 2010 was named Intangible Cultural Heritage of Humanity by UNESCO. That is why the best companies in the sector and entities such as Alimentaria México, Electrolux Professional – Kitchens and Laundries, Vinos L.A. Cetto, L’Bistro, Proepta, among others, join forces to find our country’s Chef of the Year.