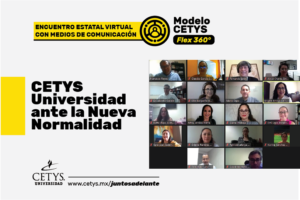 -In a virtual chat with the media from all over the state of Baja California, the actions of CETYS before the New Normal, CETYS Flex 360 ° Model, and the success of the academic continuity were announced.

Mexicali, Baja California. – As part of its commitment to the community and in response to the current health contingency, the first Virtual State Meeting with the Media “CETYS University before the New Normality” was held, to announce the actions of the Institution in the current challenges of education, as well as the CETYS Flex 360 ° Model for academic continuity.

Dr. León García commented that this year’s challenges in the face of the pandemic should be considered by Higher Education Institutions as an opportunity for improvement, something that CETYS highlights, which began its 2020-2 semester last year. August 10. Likewise, he thanked the parents and young people for trusting in the Institution’s educational project, having as a favorable response an enrollment as of August 2020 of 93.8% of what had been projected a year ago.

“2020 has been an exercise in resilience for all organizations. In the case of CETYS, it has aspects that have helped it prepare, such as the 2020 Development Plan, through which digital culture has been promoted. Capturing the opinion of students and reviewing best practices, at the beginning of this new academic year, we implemented the CETYS Flex 360 ° Model, incorporating technology, adapting pedagogical schemes, training teachers, in order to begin virtually and adjusting according to the health light status.”

He also commented that the Institution will continue to be committed to quality education from 5 fronts, towards its 2036 Development Plan, which is: Comprehensive, Inclusive, International, Innovative Training and with an important role in Research.

For his part, Dr. Gárate Rivera recalled that as a result of COVID-1, in March, the order was given for schools to stop face-to-face classes, and that, worldwide, educational institutions stopped at various levels. In CETYS, through its contingency plan, it began with constant teacher training and technological tools necessary to give continuity to education.

“This plan led us to move from face-to-face to a remote work proposal. With synchronous virtual classes or asynchronous activities. This is how we establish the bases of the CETYS Flex 360 ° Model that will accompany us in the 2020-2 semester, and we know it as the transition stage. With this model, we start classes at CETYS in a virtual synchronous way, hoping that this semester a good group of our students can return to campus. This possibility will allow us to work at the time in a hybrid model, with a percentage of in-class students, keeping healthy distance, and another group who will be receiving classes virtually”.

Likewise, he pointed out that the beginning of the semester on August 10, anticipates the dates of the vast majority of educational institutions in Mexico, this being possible thanks to extensive planning and effort in the quality of educational programs.

For his part, Dr. Dipp Núñez commented that a large investment was made in technology and in various virtual educational platforms, which allows continuous improvement in educational quality. Similarly, he commented that various security protocols have been implemented on campuses to minimize the risks of contagion, with the least number of personnel possible, health filters at entrances, and with the support and advice of experts in epidemiology.

He also mentioned the importance of community help to students who have been most vulnerable who suffered social consequences with COVID-19, supporting them through scholarship and financial aid programs that 8 out of 10 CETYS students have, as well as financial aid created especially for this contingency stage, such as the United Scholarship, with more than 200 families that have received help.

Finally, Professor Ibarra Ramonet, commented that derived from the social issues of the contingency and in support of students and families with greater economic problems, the emergency fund CETYS Solidario was created, which to date has raised more than 1.2 million pesos, with contributions from the CETYS community and society in general, which has benefited more than 120 families.

She also said that the infrastructure works, such as the Multilevel Parking Lot in the Tijuana Campus and the Baja California Center for Wine Studies in the Ensenada Campus, are still in place to detonate the competitiveness of the sector in the region.

Thus, CETYS University continues the educational and high-quality training of young talents in the region and Mexico, overcoming the challenges imposed by the New Normal with the support of the entire community.