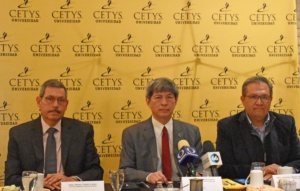 “In our three campuses we work with a sustainable vision, and mainly with the objective of positioning CETYS in the world, so that the world comes to CETYS”, Dr. Fernando León García, CETYS University System President.

Mexicali, Baja California. – The consolidation of important sustainability and leadership projects by the educational community of CETYS University marked 2019, the year in which teachers, students, and the Alumni community were a reflection of the commitment to quality education maintained by this institution.

This was stated by Dr. Fernando León García, President of the CETYS System, who along with Dr. Mauro Chavez López, Academic Director of the Mexicali Campus, met with representatives of the media in the capital of Baja California.

“In our three campuses, we work with a sustainable vision, and mainly with the objective of positioning CETYS in the world, and that the world comes to CETYS,” said Dr. León.

A fundamental part to meet this goal is the international experiences that both teachers and students live in one of the more than 100 universities located around the world, with which CETYS holds collaboration agreements.

This is how during 2019, 62% of CETYS students had a mobility experience, in the different modalities available: Academic exchange, short stays, summer and winter programs, to name a few. During 2020, this percentage is expected to increase to 65%, said Dr. León García.

Recalling that CETYS is a project created by and for the community, the highest authority of this system also reported that currently 8 out of 10 of its students are benefited from any of the scholarships and financial support that, thanks to the organization of philanthropic events such as the CETYS millionaire, Sarao in Spring, and the efforts of linking with the industry, semester by semester are made available to the student community.

Regarding sustainable development and environmental responsibility, CETYS President reviewed the CETYS Solar Power and Zero Waste projects, both consolidated during 2019.

The first one has conceived thanks to the installation of 3099 solar panels on the Mexicali and Tijuana campuses, which together will generate 1.2 Mw. In Mexicali, it will prevent the emission of 1397 metric tons of CO2 into the atmosphere, equivalent to 300 vehicles running for one year, and will generate energy equivalent to 50% of the annual consumption of this campus.

With the launch of CETYS Zero Waste, it was possible to reduce 70% of the waste directed to the landfill. It is worth mentioning that this program was awarded by the International Sustainable Campus Network (ISCN), and was broadcast by the international television network BBC which, together with the International Association of Universities, included CETYS in the project “Aiming Higher”, becoming part of the Top 5 Latin American universities engaged in sustainable development.

With these bases, during 2020 new achievements will be sought, among which the percentage of professors with a doctorate, as well as the number of teachers with an SNI degree and equivalent, stand out. CETYS will also seek to improve the retention of new students, strengthening human development in students.

In partnership with other universities, in the present year, CETYS will carry out important projects, such as the beginning of a Postgraduate Degree in Education with a Double Degree with the University of Salamanca, and the consolidation of the Triple Degree MBA program with universities from Austria and Taiwan, as well as the MBA Double Degree in collaboration with the University of San Diego, in the United States.

The incorporation of undergraduate programs taught entirely in English, and a greater presence of foreign students in the classrooms in their campuses, are also part of the CETYS objectives.

Dr. León García recalled that this year concludes the 2020 plan of CETYS University, to give way to the beginning of the 2036 plan. He added that CETYS will continue working to offer those who pass through its classrooms, a transformative experience, which allows future professionals to forge their leadership and innovation skills, to continue to positively impact their community.

“The demands of the productive sector lead us to look for an added value that we can put on the table so that students leave better prepared, and that is what we do. The world clamor now is that universities look more into their communities, and that is what we are doing,” he said.