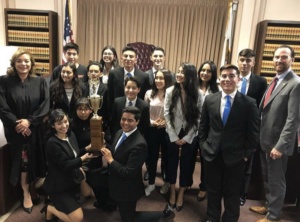 Central Union High School are this year’s winners of the Mock Trial competition and were recognized for their great work during this season.

This was the final week of the 2019-2020 Imperial County Mock Trial Competition season, ending with the awards ceremony that recognized all the other Imperial Valley high school teams.

Each year, a case packet is distributed to all participating schools in late summer to early fall. The case packet is a series of documents including the charges, penal code, stipulations, case law, and jury instructions as well as all exhibits and affidavits relevant to the case. During a mock trial, competitors are restricted to only the materials provided in the case packet and may not reference any outside sources. In order to prepare for competition, teams thoroughly read and analyze the case packet.

The mock trial competition could not take place without the volunteer attorney coaches, attorney scorers, judges, and the parents who give up many hours of their time to make sure this event is a success.