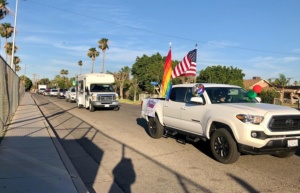 A caravan of automobiles paraded around Calexico to encourage people to be counted on the Census 2020.

The city of Calexico hosted the census caravan to promote the census and the importance of being counted. This was the latest caravan parade that has taken place in the Imperial Valley. Joining the caravan was Calexico Mayor Bill Hodge, County Supervisor Jesus Escobar, an appointee for City Council, Camilo Garcia.

For the next 10 years, the federal government will rely on the collected 2020 census data to help guide distribution of approximately $1.5 trillion in annual spending across 316 federal programs. These programs include, among many, many others: Medicaid, direct student loans, highway construction grants, low-income tax credits and loans, and even adoption assistance programs. Failure to be counted will cause a community to lose funding for the next decade.

“We are at the end of the census but we can’t let our guard down,” said Calexico Mayor Bill Hodge before the caravan started.

Mayor Hodge has been the spokesperson for the census in Calexico since the beginning of the campaign.

“We have worked with Neighborhood House to promote the census and it’s a partnership so far,” Hodge said.

The Calexico Library had kiosks where people could fill up their census but that was stopped when the COVID-19 pandemic began. Hodge added that the city has promoted the census though their social media and other avenues to encourage people to participate.

The United States Census of 2020 is the twenty-fourth United States Census. Census Day, the reference day used for the census, was April 1, 2020. Other than a pilot study during the 2000 census, this is the first U.S. census to offer options to respond online or by phone, in addition to the option to respond on a paper form as with previous censuses.

According to the Census Bureau, 60.0% of all US households submitted their Census questionnaire by May 22, 2020 – either online, by mail, or by phone. Most US households were mailed an invitation letter between March 12-20 to self-respond. They account for more than 95% of all households in the US. Prior to the ongoing Coronavirus pandemic, the remaining 5% of US households (mostly in rural areas) were supposed to be visited by census takers in April/May, dropping off invitation letters to owners.