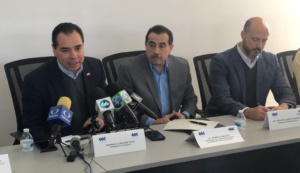 The Business Coordinating Council of Mexicali, headed by Mr. Rodrigo Llantada Ávila organized a press conference this Thursday, in Coparmex Mexicali Business Center, to express its position to invite the state government to reconsider the rise in several taxes, which the State Congress decided to include in the income law of 2020 for Baja California.

The presidium was attended by Roberto Valero, president of the Center for Economic Studies of Baja California, who presented a series of macroeconomic indicators, such as inflation, industrial production and the generation of formal jobs, concluding the fact that the state is technically in a recession, which happened, by not maintaining a flow of investments, the economy is stagnating, since growth is overshadowed by recent political provisions.

Rodrigo Llantada, CCE Chairman, stressed that he is looking to carry out a dialogue table with the State Government, so that the government rethinks the collection strategy, and established measures with the secretary of economic development to analyze the consequences of the tax increase, as well as the income and expenses that are contemplated for 2020 in government structures.

Similarly, Ernesto Elorduy Blackaller, president of Coparmex Mexicali declared that the current state expenditure is largely saturated with the workers’ pension system, which is unsustainable, since 70% of the income for the payment of taxes by citizenship, is destined to cover bureaucrats’ payroll.

Finally, it was indicated that hundreds of companies are still in time to process their respective protections through legal measures, in order to avoid being affected by the income law of 2020, which includes increases in the payroll tax towards companies, which represents a damage in terms of competitiveness, especially for small and medium enterprises (SMEs).