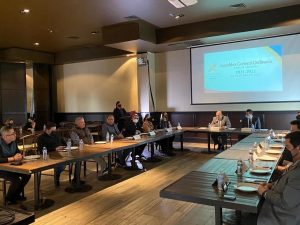 Said ceremony was held last Thursday at the “Palominos” restaurant facilities, only the directors were present. Vásquez Krauss, who had served as Vice President during the previous two councils, also served as Former General Manager of Soles de Mexicali.

Vásquez commented, the work plans are related to the continuity of the projects of the past administration, as well as seeking more affiliations that strengthen the chamber, which so far has 300 members, also plans to carry out training, updates, and modifications of its own the health contingency due to COVID19.

“That is the project that we are bringing, trying to avoid restaurant closings and trying to be able to work hand in hand with the government,” said the President of CANIRAC Mexicali.

Raúl Vásquez clarified that he will work to equal or try to improve the performance of the former President, especially due to the context surrounding the pandemic. He added that he will seek local cuisine to be recognized at the state level, nationally and, if possible, internationally.

On his part, Lic. Miguel Ángel Torres Sánchez, Former President of CANIRAC Mexicali, said he will continue to support the leadership headed by Vásquez.