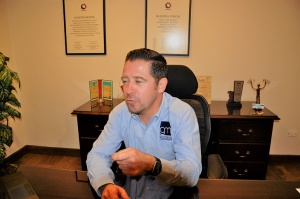 With three weeks in his new role, in an interview with Beyond Borders Gazette, the current president of Canacintra Mexicali, Eugenio Lagarde, shared his opinion in relation to the statement released by Coparmex after spreading in a press conference that only 9.4% of entrepreneurs in the state of Baja California approve the governor’s performance during his period in office, statistics that have been disseminated through all media in the region, so looking forward to knowing what opinion the industrialists had in this regard, the recent president of the Chamber of the Industry of Transformation in Mexicali, stated:

“Being respectful of the results presented by Coparmex, the survey conducted is giving clear indicators. But it is a direct survey from Coparmex members only and here in Canacintra we have not performed a survey to see what our associates think”.

He stressed that on the issue of investment, just last week the announcement of a medical supplies company took place, which confirms their investment in Mexicali, event in which they celebrated their groundbreaking ceremony, where an investment of 180 million dollars was made, generating 1500 jobs in its first stage with a construction ratio of 600,000 square feet; this is a global company which will position Mexicali as an investment location before the world.

He also stated that it is known that the state government participated in the attraction of this company and that there is one more company in the aerospace sector which is only a few days away from announcing its start-up and will also invest in the city.

The recent investment proves that the state remains being an attractive region for investment to important industries that are firmly establishing themselves, despite the uncertainty related to the continuity of NAFTA.

He mentioned that the medical supplies company, for instance, did not lease but purchased a 30 hectares lot and that is a way of putting their foot inside our state saying: “We’re not leaving”, and that they are going to stay here.

“In my three weeks as president of the Canacintra I can affirm that I was involved in the issue of electrical rates now that over the month of January we received some crazy charges with an increase of 100% or 300% to many companies or industries, then, at the moment we appealed to the governor and we certainly recognize that in just 2 days he and the staff working at the state’s economic development secretary were already in Mexico City along with some business chambers’ representatives, including Canacintra’s and Index’s, and meetings were held in Nation’s capital with the secretary of energy, with the director of the energy regulatory commission, and the governor traveled to give us the support we needed, defending the industrialists and up to date has achieved firm and tangible results.”

He concluded that so far in his three weeks of administration he considers that Governor Francisco Vega de La Madrid has played a positive role before the industrialists, however a survey has not been carried out among his chamber members, so it is unknown if the results would be different, but up to this moment there is no consideration to conduct a survey in the industrial sector, since working tables are still being carried out in Mexico City about the electrical rates issue, a topic that is critical for the industry.

“It is in our current agenda to submit a water law proposal, another important issue for the industry. At the moment we are focused on issues that affect our day to day operation. What the Canacintra seeks as its main objective is to ensure that our companies, the industries of Mexicali, are competitive, so we don’t have a survey planned ahead, besides, the government of the state has not asked for one from us, but if it is necessary we can gladly consider it, even so we see the arrival of this new project as very positive, right now that we are starting the year and I know that in a couple of days there will be another announcement of an aerospace company investment which will be very positive for our state and for our capital”.