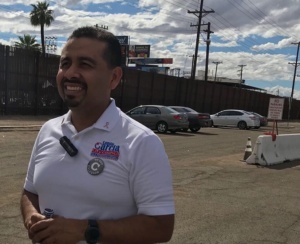 The Calexico City Council voted to appoint Camilo Garcia as the new member of the governing body during their meeting held on June 17.

On June 8, 2020, Mayor Pro Tem David Romero resigned from his position on the City Council. As a result, his seat on the city council has been vacated. The next day the council provided direction to staff to advertise the current vacancy to an appointment process. The council designated two council members (Councilman Morris Reisen and Mayor Bill Hodge) and three city management staff to a selection committee to review the applications and make recommendations to the Council.

The selection committee carefully reviewed the eligible applications and recommended Stella Jimenez, Camilio Garcia, and Orlando Espino to be considered for council appointment. However, Espino decided to withdraw his nomination thirty minutes before the meeting. Garcia won the majority vote and was elected to the position.

Due to former Mayor Pro Tem Romero’s resignation failing within 130 days prior to the November 2, 2020 election, government code states “if the vacancy occurs in the first half of the term of office and at least 130 days prior to the next general municipal election, the person appointed to fill the vacancy shall hold office until the next general municipal election.” Therefore, there will be four city council positions up for reelection this November.