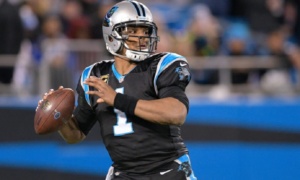 Cam Newton will get a fresh start after reportedly agreeing to a deal with the New England Patriots. According to ESPN’s Adam Schefter and Chris Mortensen, Newton and New England settled on an “a one-year, incentive-laden” contract. The Carolina Panthers released the quarterback after nine seasons. Newton will replace Tom Brady who left for Tampa Bay.

In his rookie year, Newton broke all-time NFL rookie records for passing and rushing yards by a quarterback. He became the first NFL quarterback to throw for 400 yards in his first game, shattering Peyton Manning’s record by 120 yards. He also broke Otto Graham’s 61-year-old record for passing yards by any quarterback in an NFL debut.

Newton went on to become the first rookie quarterback to throw for 4,000 yards in a season. He also ran for 14 touchdowns, more in a single season than any other quarterback in NFL history, breaking Steve Grogan’s 35-year-old record.

Newton capped off the 2015 season by capturing NFL most valuable player and leading the Panthers to a 15–1 record and a trip to Super Bowl 50. Newton, along with Steve McNair, became just the second African-American quarterback to win NFL MVP.

Over the next several seasons, Newton dealt with numerous injuries, and following the 2019 season, he was released by the Panthers.

In December 2015, Newton confirmed on Twitter that his girlfriend, former stripper Kia Proctor, gave birth to their son in Atlanta. In February 2017, Newton and Proctor’s daughter was born. Proctor gave birth to the couple’s third child, a boy, in July 2018.

In the summer of 2019, Newton fathered a son with an Instagram model, months before he and Proctor’s fourth child was born in October. He and Proctor eventually split later that year.

On Father’s Day 2020, he stated on Instagram that he is a “proud father of 7” children in total.