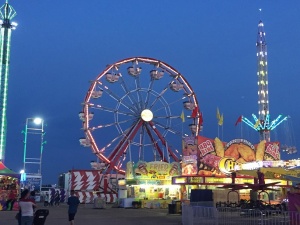 With great success, the 2018 edition of the Mid-Winter Fair in the Imperial Valley is being held. Despite the cold weather that we had this Saturday, hundreds of people and families have gathered to enjoy the games, concerts, and exhibitions at the fair.

This year’s theme is called “The Field of Dreams” where Imperial Valley agriculture is highlighted and it’s also to motivate people in the Imperial Valley that having a successful career here at home is possible and that achieving a dream is at hand.

One of the changes this year was to move the entertainment from the stands to a more central place so that more people have access to the concerts. The stands will now house the Demolition Derby, which has always been one of the biggest attractions of the fair and the favorite of visitors.

This Thursday the group “Metalachi” that merges metal and mariachi music had one of the highest turnouts of any performance at the fair. Also returning are favorites such as High School Madness where the bands and cheerleading teams of the Imperial Valley high schools will compete to see who’s best. This year, Brawley High School won first place.

Other bands performing this year are Uptown Funk, a tribute band by Bruno Mars, Checker’d Past, La Kultura and country singers Kenny Chesney and George Strait.

The event will continue until this Sunday where this year’s fair has its closure.