California Legislative Leaders Stand Together in Defense of DACA 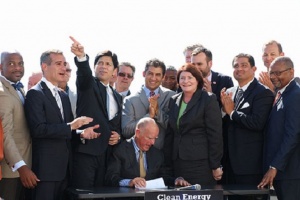 SACRAMENTO, Calif — Today, Assemblymember Mike Gipson, 64th AD, spoke as a representative of the California Legislative Black Caucus and stood with legislators from the Latino, Asian Pacific Islander, LGBT, Women’s, and  Jewish Caucuses to put pressure on the US Congress to take decisive action on DACA that includes a pathway to citizenship.

Following the repeal of DACA in September 2017, U.S. District Judge William Alsup in San Francisco just recently called for a court injunction on further executive action given a pending lawsuit. While this is good news for the short term, it still leaves open the necessity for a long-term solution.

“I want to personally thank US District Judge Alsup for blocking Trump’s plan to phase out DACA, but this should not take away our attention from the urgency of continuing to push for a permanent plan. California is home to the largest group of DACA recipients and these are our friends, neighbors and family.” Stated Gipson, “I want to remind all the Dreamers that California stands with you and we will continue to fight for you and your human right to live, work and learn here in your home. As we prepare to celebrate the legacy of Dr. Martin King Jr., he must be rolling in his grave to know that our federal government is trying to take innocent people out of their homes. We have a moral responsibility to stand together and fight back.”

Along with Assemblymember Gipson, included in the press conference were Assemblymembers Bonta, Rubio, Gonzalez Fletcher, Levine, and Low, as well as Senate Pro Tem De’Leon and Senator Hueso.