California is Experiencing the Worst Fires in its History 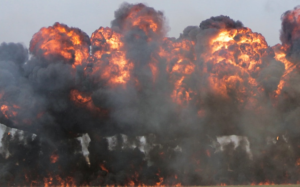 California Governor Gavin Newsom gave an update on the fires that are taking place in the state and the efforts to control it.

California wildfires have burned 771,000 acres since Aug. 15, said CAL FIRE officials. CAL FIRE spokesperson Jeremy Rahn said more than 12,000 lightning strikes have sparked 560 wildfires in California over the past several days, most of which are contained.

“We are deploying every resource available to keep communities safe as California battles fires across the state during these extreme conditions,” said Governor Newsom. “California and its federal and local partners are working in lockstep to meet the challenge and remain vigilant in the face of continued dangerous weather conditions.”

This weekend’s weather forecast is adding a layer of complication to the firefight, Newsom added, as “monsoon type weather conditions” could bring more lightning strikes to California.

Fire crews are stretched thin by the multiple fires; 96% of wildfire engines are committed throughout the state.

The Governor earlier this week secured Fire Management Assistance Grants (FMAGs) from the Federal Emergency Management Agency (FEMA) to bolster the state’s response to fires burning in Napa, Nevada, and Monterey counties and signed an emergency proclamation and executive order to address impacts of the ongoing heatwave.

Newsom thanked the Trump administration for their help in battling the fires.

Newsom said Trump will sign off on five FEMA grants related to combatting the fires, adding that “there is not one phone call I have made to the president where he hasn’t quickly responded. In almost every instance, he’s responded favorably when it comes to addressing the emergency needs in this state.”