California Has a New Governor: Gavin Newsom, a Democrat 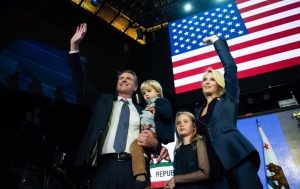 After eight years of Governor Jerry Brown in office, California has a new Governor: Gavin Newsom.

In a decisive win for governor on Tuesday night, the politician, former mayor of San Francisco (2004-2012) and businessman, who is expected to resist to President Trump at a crucial moment for the state was elected 40th governor of California.

Newsom will be sworn in as the 40th Governor of California in January 2019. He is a national progressive figure who was a prominent early advocate for same-sex marriage, gun safety, the death penalty, universal health care, access to preschool, paid family leave, technology, criminal justice reform, sugary drinks, legalization of Cannabis and the minimum wage, Gavin stuck his neck out and did the right thing, which often led to sweeping changes when his policies were ultimately accepted, embraced, and replicated across the state and nation.

Governor elect Gavin Newsom is widely recognized for his bold willingness to lead – repeatedly developing, advocating, and implementing innovative and groundbreaking solutions to some of our most challenging issues.

Gavin’s top priorities are economic development (creating jobs and reducing poverty), education (increasing affordable access to quality schools at all levels), protecting the environment, and justice – ensuring California continues to lead by example while actively resisting any attempt by the Trump administration to take the state backward.

Newsom is expected to shift state politics and policy even further to the left after eight years of Gov. Jerry Brown.

On Tuesday night, while still celebrating his victory, he shared some words with his supporters who gathered together at Downtown Los Angeles and said:

“Courage for a change…

And to those agents of anger, determined to divide us instead of unite us . . .

And to those who wonder if polarization is permanent . . . .

California is a rocket-fueled engine of human industry and innovation . . .

The true genius of California isn’t the value we work for, it’s the values we fight for . . .

We don’t reject, we protect the most vulnerable . . .

We don’t put profit ahead of clean coastlines . . .

He didn’t mention Trump by name in his victory speech following Tuesday’s election, but his remarks were aimed squarely at the Republican president, Donald Trump.

Newsom told supporters in Los Angeles that now is the time for decency, facts, trust, and the truth, and said “agents of anger” need to “pack it in.” He presented California as “America’s coming attraction” and extolled the state’s diversity, innovative businesses, and a thriving economy.

Newsom portrayed California as a beacon for those who are wearied by the rancorous tone of national politics.

The 51-year-old Newsom promised to heighten California’s role as a foil to Trump administration and Republicans in Congress, vowing to fight the president’s crackdown on immigration and dismantling of the nation’s environmental protections.