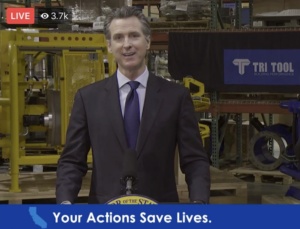 Imperial County has been advised to revert back to a “Stay-At-Home” order due to the current COVID situation, California Governor Gavin Newsom said during his daily press conference.

Newsom began his press conference talking that Imperial County is one of the 5 counties they are closely monitoring and been proving technical assistance as they need it. The governor said that California is very different and is leaving it to local leaders the decisions of how to run their counties. However, Imperial County has not been able to move forward in the reopening since they haven’t met the state guidelines.

“For this reason, we are working with their county health officials and advising them to reinstitute their Stay-At-Home order,” Newsom said.

Newsom said that while California’s positivity rate is at five percent, Imperial County is around twenty percent. The governor has mentioned how they have supported Imperial County by installing a Federal Medical Station that has helped decompress the local hospital system.

He mentioned that there are two Optumserve testing sites available and have sent ventilators and protective equipment to Imperial County.

“Over 500 people have been transferred to our local hospitals in the last 15 days,” Newsom said, “While our response to help Imperial County has been robust, we are advising them to have the Stay-At-Home order again to reduce the positive rate.”

Newsom said that he is confident that state and county officials can arrive at an agreement, if not, he will personally intervene.