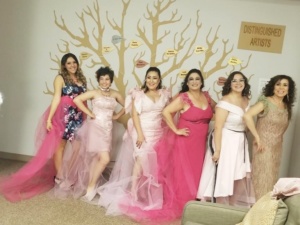 The fight against cancer is never easy but when it’s defeated, survivors hold their heads up high ready to tackle the next chapter in life.

One of those survivors was Libia Felix who at the age of 14 was diagnosed with cancer that disrupted part of her adolescence but not her desire to live, Thanks to the support of her grandmother and her parents who were at her side during this process, she is now a mature and strong young woman that is ready to live life to its fullest.

“I was able to fight cancer with the support of my parents and grandmother,” Felix said who is now 16 years old. “I got so weak that I couldn’t even open water bottle but I now feel born again and ready to continue fighting it,”

Felix was one of the cancer survivor women that participated in a fashion show organized by the Calexico Wellness Center at the Carmen Durazo Cultural Arts Center.

Joining her was her father, Rene Felix, who said that this was a difficult process but kept their faith to get through it.

“It changes your life completely since there are difficult phases where there is no improvement but we had to keep our faith in God despite everything,” he said.

Blanca Morales, CEO of Calexico Wellness Center, shared that she has lost family members to cancer and it’s important to bring awareness.

”Women who have gone through cancer need to feel empowered and if they were able to overcome this they can overcome anything, so there is hope, ” Morales said.

The event also had the exhibition of art by Calexico artist Roberto Pozos.