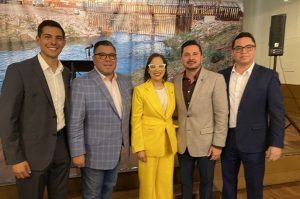 The battle to restore the New River continues and never stops. Recent funding allocation called for a big celebration for the community that will improve the infrastructure and recreation around the New River in Calexico which will have been a problem for decades.

“Today is a great milestone in our city’s history, a city-changing project that will transform our city. This is a dream come true, especially because we will soon break ground to restore this river, thereby providing our residents, visitors, and our international neighbors with a safe and healthy environment,” Calexico Mayor Javier Moreno said.

The 2022 budget signed by California Governor Gavin Newsom included $15 million for the New River Parkway Project and another $15 million from the border rivers legislation.

“There is $15 million for the New River Parkway Project allocated in the budget that we should be able to cover. So I think that by the end of the year we should see major activity,” Assemblyman Eduardo Garcia said.

While the money is welcomed, Calexico City Manager Esperanza Colio said that they still need additional funding to complete the additional phases of the New River Improvement Project.

“What we can do is to fund the first two phases and leave the third phase when we secure the rest of the funding. Eduardo Garcia’s office told us that they will give us the money so it’s a matter of accommodating the project in a way that we can fund a portion of the project while continuing working and then get the rest of the funding through a contract,” Colio said.

The New River Improvement Project in Calexico will receive a total of $28 million to commence with clean-up; $18 million coming from the General Fund, and $10 million from Proposition 68.

“What we also need to work is on the sanctions to avoid the drain of toxic chemicals to the New River from companies located on the Mexican side we shouldn’t allow that. We need tough sanctions and more vigilance from the three levels of governments,” Perez-Tejada said.

“The New River is a federal issue but the State of California has contributed 100 percent thanks to our representatives and this is a win for the residents of the west side of Calexico,” said Imperial County Board of Supervisors Chairman Jesus Eduardo Escobar.

Also present at the event were State Senator Ben Hueso, CalEPA Secretary Jared Blumenfeld, and Monica Vega Aguirre from the State of Baja California, among other dignitaries.

“Our $100 million funding request for New River and Tijuana River improvement projects are a matter of public health and environmental justice urgency for our shared border communities. For too long, residents living alongside our borders have faced disproportionate consequences of cross-border pollution, and we have been fighting for the resources needed to rectify these disparities,” Garcia stated previously.

The New River, which runs from Mexicali, Baja California, and Calexico, California into the Salton Sea, is one of the most polluted rivers in the United States and remains one of the largest public health hazards in the County of Imperial.