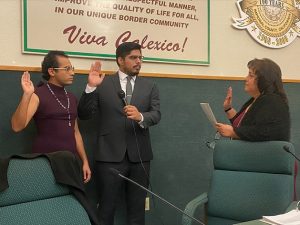 Raul Ureña and Gilberto Manzanarez raised their right hand and took the oath of office to become part of the Calexico City Council for the next four years.

The two young council members ran as a team in the last election and were successful in getting the two seats that were up for grabs. Outgoing Councilwoman Rosie Fernandez was recognized for her service.

Ureña, 25, was elected in 2020 to a two-year term when he defeated incumbent Morris Reisen by a large vote margin. Manzanarez, 29, is a newcomer to politics and said he is ready to deliver results and do the best for the city.

“As a community organizer you learn to talk to people and that’s going to be my intent as a city councilman. I will be boots on the ground taking to everyone and taking into consideration the professional opinion of our department heads and community leaders,” Manzanarez said.

Manzanarez is working on a 90-action day plan of things that can be done fast. His priority is to have the American Recovery and Rescue Plan (ARPA) essential worker checks distributed.

“We are at a time where people need this money and it needs to be distributed at the beginning of 2023,” Manzanarez said.

He also wants to focus on parks and plans to meet with community leaders to see what they do to improve them.

“We just had a binational soccer tournament that we were not prepared for so for me distributing the ARPA funds for parks including those for downtown Calexico,” he added.

Councilman Ureña will begin a four-year term with the city council. His path through the council was rocky at the beginning but now has the experience to legislate on the direction of the city.

“I have learned a lot from struggling and running a government in crisis. A good council member has to be able to write a staff report and what it takes to get things done. I’m grateful that we have averted a lot of disasters. The worst is behind us and now we have to focus on the recovery of Calexico,” Ureña said.

“If we practice community engagement and speak to the community and that is something that I want to change with this new government,” Ureña said.

Ureña also wants to promote some economic reforms to help local businesses grow. There are several considerations for this including proposing a vacant tax property tax for commercial and housing units.

“We have a population that is very creative but unable to afford a commercial space. If you hit those points with some reforms at the city level you can have an explosion of commercial activity in Calexico that will generate sales tax,” Ureña said.