Living in a border area brings unique experiences that brings together elements such as the arts, culture and language. Symbolizing the binationalism of two cities such as Mexicali and Calexico was a challenging task but thanks to the collaboration of many, a border fence mural was created.

From 1998 to 2001 over 1,500 volunteers united to paint 2.5 miles of a border fence between Calexico and Mexicali. Earlier this year the federal government ordered the replacement of the fence. The U.S. Border Patrol and Calexico came to an agreement to preserve the remains of the mural fence. The city opted to have the mural at Rockwood Park as a symbol of union between both cities.

The fence had to be restored and that job was given to local artists Eduardo Quintero, Luis Hernandez and Pablo Castañeda.

On Oct. 16 there was a special ceremony to unveil the new monument in the presence of dignitaries of both sides of the border.

The concept of painting a mural on the border fence originated at the City of Calexico Beautification Commission meeting in 1998, the commissionaires, community members and guest from the city and county governments, who had been discussing ways to combat graffiti in the community, had an idea to promote mural painting as a means of graffiti abatement. 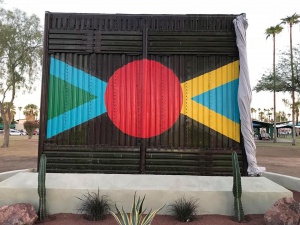 A plan of action was developed and the binational mural project was born. The task of finding an artist with the necessary expertise, willing to take on such a large scale project public art project and see it through to fruition, proved almost effortless. Renowned artist, Armando Rascon, who resides in San Francisco, was born and raised in Calexico was called. When contacted, he was immediately enthusiastic about the project and accepted to be the lead artist.

Rascon proposed a graphic weave design based on the project’s mission, a visual celebration of cultural unity. He showed the group a bracelet commonly known as a “friendship bracelet,” worn frequently by many people in the Americas. The bracelet is woven of many different colored strands of thread forming a single solitary band. He envisioned enlarging a close detail in the wave of the bracelet and creating a giant graphic, which would colorfully span the landscape along 2.5 miles expanse of the border fence.