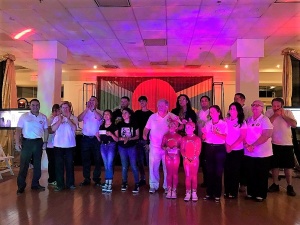 The Calexico Rotary Club hosted its first annual talent show on Oct. 20th as 18 participants took over the stage and gave the audience their best performance. The club prepared itself for this event for many months so that people could showcase Imperial Valley talent and raise funds for future projects that will benefit the city.

Thanks to the leadership of Victor Legaspi who inspired the Calexico Rotary Club to organize this talent show, a new Calexico tradition was born that brings families together and fun at the same time.

All participants from comedians, dancers, singers, musicians brought something unique to the show and brought forward their best talent.

The winners are as follows:

The judges for this talent show represented people from the community that have a background in singing and performing arts. They are Guadalupe Espino, John Leo and Nathalia Lozano.

Guadalupe Espino: A high school Spanish teacher with a passion for mariachi music. She has performed in many places and was the winner of the Mariachi Idol competition at the Calexico Mariachi Festival in 2009. Lupita, as she’s known by her friends and family, is a wife and mother of two that will bring her knowledge in music and performance to the table.

Nathalia Lozano: A rising star in music and a unique voice. She studied opera and is a soprano. Every time she signs opera she captivates the audience with her extraordinary voice. She has recorded her first album and collaborated with renowned songwriters like Fato Guzman that has worked with renowned artist like ‪Pepe Aguilar and has written hit songs like “Por Mujeres Como Tu”, “Miedo”, and “El Principe Pobre”

John Leo (Leonel Ibarra):  Actor, musician and Beatle maniac, John Leo started impersonating John Lennon in 2005, after being chosen to play the part of John Lennon for a TV commercial. He and his band, The Eggmen, have performed in many international venues such as The Star Club  (Hamburg, Germany), Teatro Metropolitan (Mexico City), Villa Fest (Durango, Mexico) and The House of Blues (San