Calexico Police Department had their “Raspado with a Cop” event 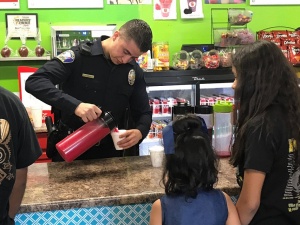 In an effort to have a closer relationship with the community and listen to their concerns, the Calexico Police Department hosted its first ever “Raspado with a Cop” event at Cuchis in Calexico.

The event was well attended by residents who had the opportunity to talk to police officers and know them on a personal basis. Cuchis provided free raspados.

This event was the first one the Calexico Police Department has at Cuchis and it is part of an ongoing program that the department planned to speak with the community on a monthly basis.

The police department will host similar events in different parts of the city in the coming months.

The next event the Calexico Police will host will be “Kids & Badges”, where the department will take underprivileged children to buy them  toys for Christmas.