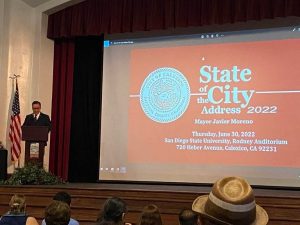 Each year, the Mayor of Calexico gives the State of the City Address to inform the public about the success of the city in the past year and a vision ahead.

The Rodney Auditorium at San Diego State University Imperial Valley was the host of the first in-person State of the City Address in two years given by Calexico Mayor Javier Moreno.

The Mayor took the opportunity to recognize community leaders and medical practitioners that were on the front lines of COVID-19.

“City Council is working together and considering all views on the tough issues,” Moreno said. “To my fellow council members, thanks for working with me in unity and partnership even though we have a rocky relationship at times, we get things done. Our job now is to ensure that Calexico is the undisputed premier city.”

Moreno said they will soon be voting for a 162-million-dollar budget that prioritizes fiscal responsibility and ensure its sustainability into the future.

“Our top priority without a doubt is public safety. The most basic services the government can provide. We have experienced population growth over the decades, yet our police force has decreased. With a small police department crime becomes a problem and our response time lags, and our community feels less safe. Thankfully with the hiring of a new police chief, we will expect a data-driven, community-based, and resource-conscious, crime reduction plan that works,” he said.

The Mayor thanked the men and women in uniform and said that they will be adding new patrol cars to improve reactivate response times.

“We will work to pass a comprehensive economic development policy that focuses on equity and innovation,” Moreno said about their upcoming plans. City Council recently pass a $9.5 million budget from funds received from the American Rescue Plan Act to help recover from the impact of COVID-19. To this date, disbursements of $1 million for city employee premium pay, 200 thousand for the new fire department, 35 thousand for the Recreation Department’s Summer pool program, and the purchase of two ambulances. As well as the future purchase of six new police cars and equipment for fire and police personnel.

Mexicali Mayor Norma Alicia Bustamante was at the ceremony. Moreno had some remarks in Spanish and spoke of the binational cultural and commercial ties between both cities.

“In the future, I would like to have a signing of a Binational Health Committee between Calexico and Mexicali with the objective of coordinating solutions of health and wellness,” Moreno said.