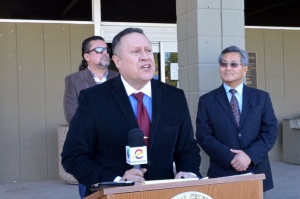 Interim Police Chief Reggie Gomez was relieved of his duties at the Calexico Police Department. Mr. Gomez was hired by the City of Calexico on November 30, 2015. Upon his hire, Mr. Gomez spearheaded the transition of the department and contributed to the operational improvements that are essential in administering public safety.

The City of Calexico acknowledges Mr. Gomez for working diligently to secure public safety grant awards that have enabled city police officers to be properly equipped to conduct their duties, in addition to promoting public safety awareness events that engaged the work of police officers with community members and local businesses. Lastly, the City of Calexico commends Mr. Gomez for his dedication and support to the citizens of Calexico.