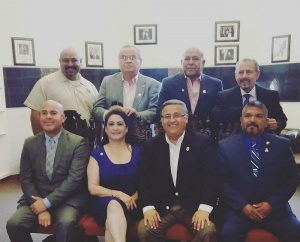 It was Calexico’s turn to host the Border Mayor’s Summit that, in the first six months of activity, has been able to create a working agenda for the border region of Mexicali, Imperial Valley, Yuma and San Luis.

As the week of celebrations of the 110th Anniversary of Calexico are taking place, the city hosted the second summit that follows the one that took place in Mexicali last October hosted by Mexicali Mayor Gustavo Sanchez Vasquez. The City of Yuma hosted an economic development summit last month and El Centro, California will be next hosting a public safety summit on May 18. San Luis Rio Colorado, Sonora will host an environmental summit on April 28.

The Second Annual Summit took place at San Diego State University Calexico Campus. The agenda of the day included a tour of the Calexico West Port of Entry where the attendees had a presentation by U.S. Customs and Border Protection about the construction of the port of entry expansion that will be opening soon.

The Calexico West Land Port of Entry is the third busiest land port in California, with 4 million northbound vehicles and 4.5 million pedestrian crossings each year. The current facility’s physical infrastructure, built in 1974, is undersized relative to existing traffic loads.

The project will be constructed in two phases: Phase one will consist of five southbound lanes POV lanes and a southbound bridge over the New River, ten northbound POV inspection lanes with primary and secondary inspection canopies, booths and inspection equipment, a new head house and site work to accommodate those facilities on the sloping side.

The meeting returned to SDSU where the mayors gathered and gave updates and presentations of their current projects. Miguel Figueroa, Calexico’s Economic Development Director, gave a presentation of current and upcoming projects the city is working on. Among them are infrastructure improvements that will help the city become more attractive for investors and the construction of a residential development project that will bring 1,000 unit homes to Calexico. Figueroa said that Calexico is finding a new identity and working hard so that the city becomes business friendly.

Figueroa also spoke about the New River project. It was reported that the water infrastructure project would address these problems by installing a trash screen just downstream from the Mexico border; piping polluted water away from Calexico to wetlands and aeration structures for remediation; and replacing polluted water in the river channel with treated wastewater from the city’s treatment plant. The New River Improvement Project also envisions a pedestrian and bicycle parkway that would run along the river in the Calexico area. Design of the River Parkway has been recently completed using federal and state funding, with construction to begin soon.

Mayor Douglas Nicholls of Yuma gave a report on the Economic Development Summit held last month and the action steps to be taken moving forward.