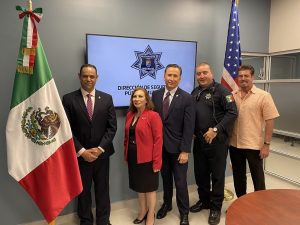 In another step to consolidate the relationship between Calexico and Mexicali, Calexico Mayor Rosie Arreola-Fernandez and Mayor Pro Tem Javier Moreno participated in a project that will improve the U.S.-Mexico relationship and bring a better understanding of the challenges and strengths of the border region.

Among the topics discussed were the economic impacts of COVID-19, the USMCA, security at the border, evaluation of binational relationships among other issues.

“This was an educational experience for me and to participate in the studies that they are doing. It is important for us to be involved in this,” Mayor Fernandez said.

Mayor Pro Tem Javier Moreno added: “This was a great opportunity to dialogue on several issues such as how the border is going to be open, we discussed health, security, and other important issues that relate the sister cities of Mexicali and Calexico.”

Former Calexico Mayor Alex Perrone coordinated this meeting and was happy with the participation the two Calexico representatives had in this forum.

“I take away from this meeting this moment because we are seeing these investigations are a positive conclusion and the two countries are continuing extending their hand, the US to Mexico, and Mexico to the US,” Perrone said.

Mayor Arreola-Fernandez and Vice Mayor Moreno were interviewed by Angel Armando Martinez Covarrubias who is currently structuring his academic research presentation for his participation in the Hemispheric Seminar “Strategic perspectives as an instrument of anticipation and construction for national security,” organized by the Center for Naval Superior Studies of the Secretary of the Navy, which will take place from July 7 to 9, 2021 in Mexico City.

“The Mexico-United States relationship is one of the most complex, mature, and institutionalized that currently exist in the world. The strategic importance of the dialogue between Mexico and the United States defines a comprehensive, frank, and constructive agenda on priority issues of common interest, to advance the issues on the common agenda,” expressed Martinez Covarrubias.

He added that many governments are increasing their focus on developing strong strategies through case studies and with a real-time field vision approach, which helps mitigate risks and find best and good practices that help us together.

“The objectives of Mexico’s foreign policy seek to expand and strengthen Mexico’s presence in the world. We are working with the United States to continue promoting Mexico’s image, strengthen and consolidate the bilateral agenda, and build new stages of dialogue and negotiation based on shared responsibility and mutual respect,” he said.

Martinez Covarrubias added that Mexico and the United States have various formal mechanisms for dialogue and negotiation that make up one of the most diverse and complete institutional structures in the world. The agenda between the two countries is broadened and has a direct impact on both societies. During the past decade, the bilateral relationship between Mexico and the United States underwent a new cooperation scheme that determined the reconciliation between both nations.  In the bilateral agenda, they began to raise issues of mutual interest.

“We must establish a regional cooperation model seeking the transfer of technological equipment, training programs, good practices, and training of operational capacities with non-intrusive equipment, which are auxiliary in the implementation of prevention and strengthening policies of society in general, in all items,” he said.