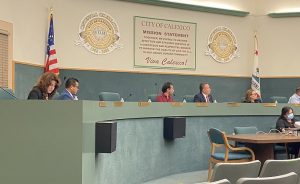 While the recent news has been bad for Calexico regarding its financial conditions, corrective measures have been taken to fix a litany of problems that are affecting city facilities.

The council approved the recommendations made by Calexico City Manager Esperanza Colio-Warren to move $2,467,251 bond proceeds from the Redevelopment Successor Agency 2nd Street project to Measure D from bond funds to offset the shortfall of Fire Station #1 construction.

The council approved the allocation of $2,054,000 from the American Recovery and Reinvestment Act funds for repairs to several city facilities including Fire Station #2, the Library Restroom and roof, the police department roof, the community senior hall roof, and the international airport.

The city will use consulting services that will help with the development fee study, updated housing element, and operations/process update. The total cost of those services is $350,000.

In a similar action, the council approved the final prime contract change order #6 for the new Fire Station headquarters.

The new fire station will be one story and approximately 9,000 SF. The new station has three drive-through apparatus bays with suppression support spaces, which include a turnout room with a clean-up area, a workshop, a restroom, hose storage, an air compressor room, and mechanical support spaces.

The firefighter living quarters include eight firefighter bunk rooms, four gender-neutral restrooms, a laundry, a day room, a dining, a kitchen, and a fitness room.

The apparatus bays are designed to be a cooling center for the City during high-temperature days.

The site improvements include a new concrete driveway approach, a front concrete apron, a rear concrete apron, and decorative metal fencing with pedestrian and automatic sliding gates and keypads. New paving area in between the new fire station and existing police station. Renovation of an existing ADA parking area and a new gravel area for the horizontal hose drying rack. A new emergency generator with skid mounted fuel tank is included, an outside patio with a BBQ area, and on-site parking for fire personnel. The project includes new and existing plantings and landscape areas, irrigation, and bio-retention areas.

The Fire HQ Station has incurred project expenditures over its available, authorized funding sources. The Community Development Block Grant – Program Income that had been planned for the project did not become available. Also, both the construction contractor and design firm have proposed change orders to their original contract costs to respond to evolving project requirements.