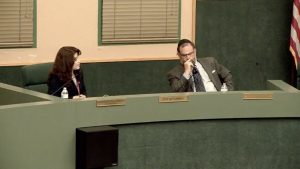 A political forum announced for Sept. 19 featuring the Calexico City Council candidates was canceled after the City Manager determined that the use of the Calexico City Hall Council Chambers and its public resources to hold a political campaign forum was not appropriate.

Calexico City Manager Esperanza Colio Warren responded to a press release by the Calexico and Brawley Chambers of Commerce on Sept. 14 that accused her and Calexico Mayor Xavier Moreno of canceling the forum without explanation and depriving the citizens of hearing from the candidates running in this election.

“City Manager Esperanza Colio and Mayor Xavier Moreno recalled the permit that allowed the Chamber of Commerce to use the City Council Chambers for the candidate forum. No explanation or reason was given for the recall,” Katie Luna, President of The Chamber of Commerce for Greater Calexico, stated, “These events are designed to give the public and candidates a forum to ask questions and exchange information in a safe environment. We have successfully conducted these events for years with other chambers, and it is a shame that we will not be allowed to do this in Calexico. The business community and general community are being deprived of an important information exchange that could help them make better-informed decisions during the 2022 election.”

Ramiro Urias, CEO of The Chamber of Commerce for Greater Brawley, chimed in and stated, “When the Chamber of Commerce goes through the event planning process, our staff follows all proper permitting procedures required. In this case, we received the approved permit from the city on September 1st. Unfortunately, we will be unable to secure a new location by next Monday because it takes a great deal of coordination between candidates, the staff, and the volunteers to make this happen. Since Calexico was our kick-off event for the tour of scheduled candidate forums, it will be difficult to reschedule in a timely manner.”

Beyond Borders Gazette spoke to the City Manager and said that most of what was said in the press release was false. Colio said she didn’t feel comfortable using City Hall for the forum since it’s a public building and it cost public money to maintain and take care of facilities.

“City Chambers are public resources. And for that reason, public funds in general are not used for any campaign matters. I explained to Ms. Luna that I had concerns about using this facility for campaign purposes,” Colio explained. “You can camouflage it by saying it’s an educational forum but the reality is everybody is speaking on their behalf to be selected as the Calexico City Council member. And that makes it a campaign.”

“To me, that is a disorganized forum because they could be targeted to specific individuals and I don’t feel that this city should be using these facilities to target individuals in a public arena.“ Colio added the organizers didn’t have security plans for the candidates in the event someone was targeted.

Colio added that she was the one that took the decision and not the Mayor as the press release stated. She said they contacted San Diego State University so that the forum could take place and were given two available dates at Rodney Auditorium on the same week it was scheduled.

“So for those reasons, I have a responsibility to use public funds and I’m not okay to use it for campaign purposes. This is a professional environment and I want to keep it like that,” Colio said.