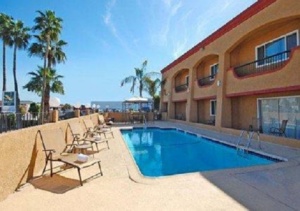 The Calexico City Council approved a conditional use permit for a proposed conversion of the Hollies Hotel into an affordable senior and homeless living facility.

The approved resolution calls for the conversion of 43 Hotel rooms at the Hollies Hotel located at 801 Imperial Avenue and the existing 16 unit-apartment complexes at 18 Lincoln Street into a 59-unit affordable Senior and homeless population living facility. Both buildings are owned by Dean Hotel Management, Inc. The two buildings are in need of repairs and are in a state of decline.

The Planning Division received a letter from the Director of the Imperial County Behavioral Health Services Department, Andrea Kuhlen expressing her support for the project arguing that it will be beneficial for Calexico’s most vulnerable population.

The project went before the planning commission but failed to secure votes to be approved. The applicant requested an appeal of this decision before the city council.

The City of Calexico maintains a deficit of affordable housing lower-income people according to the 2019 Annual Progress Report submitted to the Department of Housing and Community Development. The facades of the buildings would be upgraded to reflect modern architectural standards.

“We will be doing a full remodel of the hotel so we can give our seniors can have a brand new room to live in,” said Roy Roben, the project applicant

“The great thing about this is we will put that building to good use for the citizens of Calexico,” Councilman Lewis Pacheco said.

Roben added that the plan is to have a community center type place at the hotel so that senior citizens can congregate and also have an office for doctors who will give care to seniors so they don’t have to go out.

“Especially in this COVID time, the most vulnerable population are the senior citizens so it will be great for them if they can get some of their care and have entertainment for them as well,” Roben said.

The applicant is also proposing a major tenant improvement, which would bring both buildings into compliance with the 2019 California Building Standards of the California Fire Code.

The Planning Commission had determined that there is a sufficient parking space to accommodate the new use and there will be no need for an increase in parking spaces pursuant to the off-street parking section of the Calexico Municipal Code.

The Imperial Avenue corridor is in need of new investment and this project would be the first major development in the area in many decades said Chris Velasco, Contract Planner for the City of Calexico.