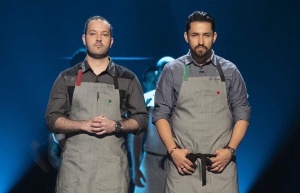 The new culinary competition on Netflix brings the best chefs in the world to a new show called “The Final Table” and one of those Chefs is from Calexico, California.

Calexico native Chef Esdras Ochoa is one of the participants in this new show that began streaming worldwide on Nov. 20. Being a chef was not on his initial plans but life had other plans for him.

His partner in this competition is Chef Rafael Gil whom he became good friends recently when they worked in a business venture in Hong Kong.

The series features 12 teams of two chefs from around the world cooking the national dishes of Mexico, Spain, England, Brazil, France, Japan, the U.S., India and Italy. Each episode focuses on a different country and its cuisine, with celebrity ambassadors, food critics and the country’s greatest chef eliminating teams until the finale.

Esdras graduated from Calexico High School in 2000 and then moved to Los Angeles to study fashion design and marketing. While there he missed the Mexicali street tacos and its flavor and decided to invest in a mobile cart set up and called it Mexicali Taco & Co. that quickly became popular among LA residents. Two years later, he opens a restaurant where he continued his northern Baja cuisine.

He is now working on opening a restaurant in Mumbai, India.

Esdras is always looking to support the youth of his hometown of Calexico. Each year, he and his partner recognize two seniors for the scholarship to hopefully help them along their journey of furthering their education and their path to success.