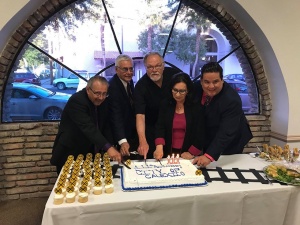 Calexico has gone through two economic crises within the last ten years and political instability among the city council in the past hindered the progress of the city. Some call it the “lost decade of Calexico” where the city lost many opportunities for growth and capitalize being the border city of the Imperial County. But as Mayor Lewis Pacheco said on his State of the City Address, the city is back on track correcting the mistakes of the past and looking into a better future.

The State of the City Address also served as a celebration of Calexico’s 111th anniversary, a city that was incorporated on April 16, 1908. Calexico is a general law city that sets its own laws and policies by ordinances and resolutions. The city maintains a city council/city manager form of government that adopts the annual city budget and establishes goals, objectives and performance measures for the City Manager.

Mayor Lewis Pacheco said on his speech that most of the recent troubles have been generated by the lack of a budget to guide the city.

“The city was not preparing its budgets correctly due to the lack of fiscal protocols and compliance processes that resulted in deficient management and operation practices in the city’s finance department,” Mayor Pacheco said.

Another issue was that the city was not submitting adopted budgets by the required July time frame, Pacheco mentioned.

“Working without a budget left the city working blindly and could not monitor its revenues and its expenditures through the year. As an example, the Fiscal Year 2015-16 budget was due July 2015 was not adopted until June 2016, twelve months later,” Mayor Pacheco said.

The $3.5 million deficit was addressed by acquiring a loan from the wastewater fund to cover General Fund shortages.

“We lost employees an did not replace the workforce, so we could save on salary and benefits. We reduced our workforce from a total of 250 employees to 140 employees that we have right now. We froze hiring and a furlough system was also implemented where the staff is off every other Friday to provide cost-saving measures,” Pacheco stated.

Another shortcoming for the city was when the California Department of Housing and Community Development froze all funding from the Community Development Block Grant programs because of inadequate reporting due to a lack of interdepartmental communication. Because of this, Pacheco told the audience, Calexico lost opportunities to apply for community service grants and was unable to compete for this funding for four fiscal years.

Despite the problems of the past, Pacheco said Calexico is now going back to the right direction. Some of the project’s actions that will benefit the city are:

“I see our city with potential grow and meet the challenges that she incurs, with the current leadership at city hall and a city council willing to work together to provide its citizens with efficient service that it requires,” Mayor Pacheco said.