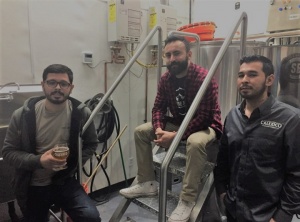 The dream of three Calexico young entrepreneurs has become a reality with the opening of the Calexico Brewing Company this month.

Craft beer has been getting a lot of momentum in the binational region having several tasting rooms open in the Imperial Valley, Mexicali, and San Diego. Many craft beer business people have seen the market to create a beer that is done locally and represents the values and the identity of their cities.

According to the statistics by the Brewers Association, overall U.S. beer volume sales were static in 2016, whereas craft brewer sales continued to grow at a rate of 6.2% by volume, reaching 12.3% of the U.S. beer market by volume. Craft production grew the most for microbreweries.

With the craft beer boom that we have seen lately, it was just a matter of time before the border city of Calexico, California would have its own place with a brand proudly representing Calexico.

It was a journey that started in 2015 by Jose Luis Yepez, Ramiro Salas, and Robert Yepez, all of them in the mid-20s, who decided to enter the craft beer world and naming it “Calexico” to promote their hometown all over the world. The members of the Calexico Brewing Co. chose to investigate in Calexico due to its economic opportunities being next to the border that can create tourism opportunities for the city and the county to have tourism opportunities.

Their goal is to create a prosperous craft beer community that inspire change and growth through the county. Since 2015, Calexico Brewing Co. has been well accepted by the residents of Calexico and Imperial Valley. Their hard work led them to years of preparation to open their own place were people will have a new option in entertainment and fun.

Calexico Brewing Co. is now open for business and can be found at 2320 M.L. King Street in Calexico.